Posted on February 6, 2011 By Terrell Clemmons 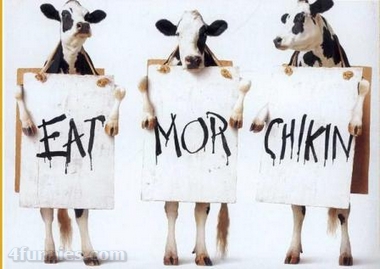 Mike Adams is one of the funniest writers I know. Last week he told his facebook friends, “I’m tired of sexism. I’m opening a Dude-fil-A.” Okay, some of his jokes are silly. Some of them will make you groan. But even when he cracks a joke, at least in this case, there’s a something worth paying attention to.

I want to apply this Dude-fil-A wisecrack to a movement afoot concerning Chick-fil-A. It has come to the attention of some gay activists, or what I have called the Viewpoint Enforcement faction, that Chick-fil-A sponsored a marriage seminar put on by the Pennsylvania Family Institute. To them, this is unacceptable. Heat must be applied, and demands must be made.

“If you’re eating Chick-fil-A, you’re eating anti-gay,” according to this New York Times article. Michael Jones of Change.org demanded that Chick-fil-A pull its sponsorship from the marriage seminar.

Now that’s all fine and well. Free enterprise and free speech allow Mr. Jones to express his opinion concerning Chick-fil-A, to encourage his supporters to do likewise, and to vote regularly with his dollars. It’s clear from the New York Times article that some people are considering whether or not to continue to Eat More Chikin.

But free enterprise and free speech allow Chick-fil-A, a private company, to sponsor the events of their choosing. In the interest of maintaining free enterprise and free speech for all, I have a novel suggestion for Mr. Jones and anyone else who doesn’t like Chick-fil-A’s decision. Rather than complain and demand that they change, start your own restaurant chain. Run it the way you like, and sponsor whatever events you choose. Isn’t that what freedom and tolerance are all about?

Oh, and I have a great idea for you for a name.