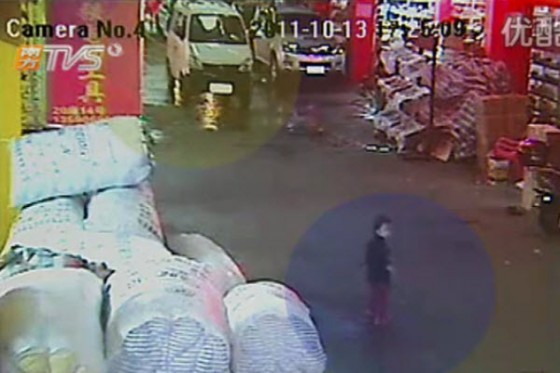 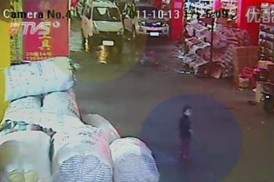 Late on the afternoon of October 13th, 2011, as shoppers milled about a local market in Foshan, Guangdong province in southern China, a lone toddler strayed into the narrow street. Then, in a scene more horrifying than anything Hollywood could stage, a white van approached, struck the child, paused as if the driver knew he’d hit something, then lurched forward, causing the rear wheel to pass over the child’s limp body as the van continued on its way.

Pedestrians and cyclists strolled past the bleeding child, some swerving slightly to avoid her as one might avoid a pothole. Then, sickeningly, a second van approached, ran over the helpless child, and continued on its way. A full ten minutes after the first hit-and-run impact, an older woman picking up trash noticed the child, pulled her out of the street, and called for help. Two year old Wang Yue died four days later.

When a surveillance camera video of the ordeal went public, some Chinese soul-searching ensued. “The Chinese citizens have finally arrived at their most immoral moment!” one Chinese national said. But while nothing can excuse the appalling display of apathy, we might extend the Chinese a measure of grace for confusing the responsibilities of individuals, family, and government in a thoroughly Communist state such as China. In fact, apathy and neglected children are precisely what we should expect from a society built on the theories of Jean-Jacques Rousseau, a prime forerunner of Communism. 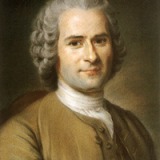 Born in Switzerland in 1712, Jean-Jacques Rousseau lost his mother at birth and was abandoned by his father at age ten. At age fifteen, he left Geneva and wandered Italy and France for more than a decade. Like any bohemian, as he roamed, he pondered philosophy. A thoroughgoing non-conformist, Rousseau rejected his Calvinist upbringing with its ideas about sin and divine revelation and adopted instead a Universalist approach to religion and a humanist view of innate human goodness.

But even a beatnik bohemian runs up against the exigencies of life. Rousseau’s most influential work, The Social Contract, opened with the now famous line, “Man is born free, and everywhere he is in chains.” Describing himself as subjugué, which meant ‘dominated’ or ‘under the yoke,’ the restless philosopher wanted to be free to create his own identity, to follow his own road, but he was at every turn hindered by social ties, by the expectations and conventions of society.  To achieve his highest potential, Rousseau concluded, man must throw off all of these “chains.”

And throw them off he did. A look into Rousseau’s private life reveals what probably really drove his “philosophy.” In his thirties, he became the lover of Thérèse Levasseur and assumed the burden of supporting her large family. Though they did not marry until much later, she bore him five children, each of whom he pressed her to deposit on the doorstep of a local “foundling asylum.”

Deadbeat Dad, Father of Statism
But the fallout from Rousseau went far beyond his five orphaned children. Rousseau’s writings gave birth to the modern concept of political revolution, inciting in turn the French (1789-1799), Russian (1917), and a series of Chinese (1911-1976) Revolutions, all of which are now known for the rivers of blood and stunning national catastrophes that followed them.

The expressions of Rousseau’s ideas took different forms in the different nations to which they spread, but one thing they had in common was the elevation of the state to the role of supreme liberator of the people and ultimate authority and caretaker over them. A perverse inversion of the original American understanding of liberty – which valued and recognized inherent human rights that the state may not transgress – Rousseau’s view of liberty is the diametrical opposite. As Nancy Pearcey explains in How Now Shall We Live?, to Rousseau, “freedom meant liberation from the forms and institutions of society – family, church, class, and local community.” And the state would and should be the liberator. “Each citizen would then be completely independent of all his fellow men,” she quotes Rousseau, “and absolutely dependent on the state.”

Rousseau, who went on to write about education and child-rearing, heartily defended both his virtue and his actions concerning his infant children. “How could I achieve the tranquility of mind necessary for my work, my garret filled with domestic cares and the noise of children?” He summoned Plato as his witness, for by transferring his responsibilities to the state, “I thought I was performing the act of a citizen and a father and I looked on myself as a member of Plato’s Republic.”

The Epic Failure of the Paternal Liberator State
Some father. Only the firstborn of Rousseau’s children had the minor dignity of a cipher-card inserted in his clothing. All were unnamed, and it’s unlikely any survived childhood. Records from the institution showed that fewer than one in five of its charges lived to age seven.

And some “Republic.” As Nien Cheng notes in her beautiful autobiography Life and Death in Shanghai, the Chinese translation of ‘Communism’ means ‘sharing property.’ But while Communism and its softer version socialism begin with the idealistic premise of shared property, they always lead to neglect and worse. For what no one in particular owns, no one in particular takes responsibility for.

Tragically, the principle sometimes extends to children. On the afternoon of October 13th, 2011, Wang Yue became one more casualty of what happens when everybody is “absolutely dependent” on the state.

← Sustainable Liberties
Incompetence in High Places, Heroism in the Common Place: America at her Worst and Best →